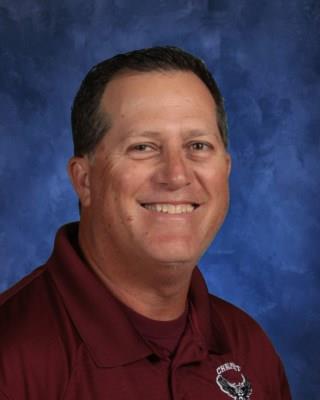 Coach Buuck is a certified Physical Education teacher who began his teaching career in St. Bernard Parish during the 1991-92 school year. He taught at P.G.T. Beauregard Middle School for 15 years and has been at Chalmette High since August 2006, currently serving as a Physical Education instructor at the 9th grade academy.

Coach Buuck graduated from Holy Cross High School in 1986 and the University of New Orleans in 1991 with a B.S. in Human Performance and Health Promotion. He and his wife Nicole have three children, Jacob, Carly, and Caleb.

Coach Buuck has been coaching football at Chalmette High since the 2006 season where he coaches the running backs. In addition, he serves as the faculty representative for gymnastics. He began his coaching career in 1991 at P.G.T. Beauregard, serving as head coach in football, basketball, and baseball for two seasons. He then moved on to coach football and baseball at St. Bernard High School for six years beginning in 1993. He later returned to P.G.T. Beauregard as head baseball coach until Hurricane Katrina.

Coach Buuck is passionate about the outdoors and loves all sports. Attending Saints and LSU games with his family are among his greatest joys. He enjoys getting to know his students and encourages them to put forth their best effort in everything they do.